And so begins the work on my TNC interface.

I’m starting with desoldering a couple of transformers I need from some old dialup modems we had in the garage. 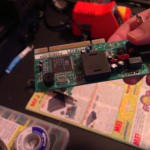 That black square is hiding the transformer we seek. 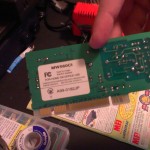 That square of pins is the transformer we’ll be desoldering. 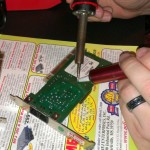 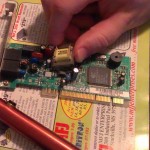 Prying the transformer off the PCB. 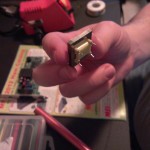 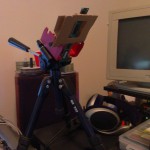 the fabulous tripod mount for phone/camera

See? Nothin’ to it. I would have had a fabulous timelapse video of the process, but it seems the build of Jellybean I’m using on my phone doesn’t support that yet (built-in camera app crashes)
After this, it’s just a matter of putting the pieces together according to various schematics I’ve found on the internets.