The Poor Geek > Blog > Skylake has the Bends

So you say you bought a nice shiny new i7-6700k and you’re going to be schooling some newbs in Battlefront? Be careful on what heatsink you choose because reports are in and they’re saying your CPU 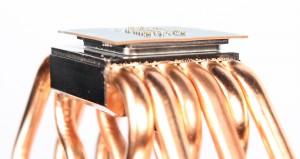 just can’t handle the pressure. Intel’s new Skylake processor series features the same relative shape as the previous generation processors, however not quite the same structure. What does this mean to desktop users looking for the latest and greatest? Fatality! That’s what.

It has been confirmed through a number of tests that some CPU heatsinks/coolers are capable of applying enough pressure that it can actually BEND the structure. Scythe has actually confirmed this and are alerting it’s customers of possible complications with their heatsinks. The company has stated the following. 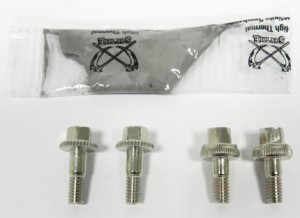 The company Scythe EU GmbH announces that on several coolers from its portfolio, a change of the mounting system for Skylake / plinth is made ​​1151stAll coolers are in fact generally compatible with Skylake sockets, but it can in some cases result in damage to CPU and motherboard when the PC is exposed to stronger shocks (eg shipping or relocation). To prevent this, the pressure was reduced by an adjustment of the screw set. We will send the new set of screws you also like to charge. Please send your request via email tosupport@scythe.com or use the contact form on our website(http://www.scythe-eu.com/support/technische-anfragen.html).

Scythe has gone as far as sending retrofit kits for their customers. The contents of the package are elongated mounting screws, as well as a packet of thermal paste for the following heatsinks: Ashura, Fuma, Grand Kama Cross 3, 4 Mugen (including PCGH Edition), Max and Mugen Ninja 4. But the manufacturer is not alone in the matter. Arctic Cooling and Enermax have announced that some of their coolers MAY also cause damage to the CPU and or socket.

The problem goes as far as complete PC manufacturers having to create custom brackets and padding to go inside the PC to help support the heatsink during shipping, which is where a lot of the problems were coming from.

So why is this happening? Well, the problem falls on the substrate of the CPU board (the printed circuit). With the right amount of pressure, the CPU can bend and apply pressure to the socket, pins, springs, or conductor tracks in the substrate. Of course, most motherboard manufacturers won’t warranty a board that has bent pins either. So your whole fancy setup, could be at risk of being a total loss. As of right now, there’s no word on whether Intel will replace the processors that are affected. 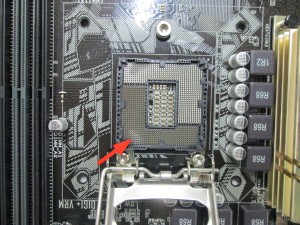 In the figure to the left, you can see the effects of this problem on a motherboard. As you can see from the arrow, as well as at the top left of the socket, there are distinctly bent regions of the socket pins. At this time, it’s advised that if you are using a 3rd party heatsink, you may want to loosen your screws a little bit to reduce the amount of pressure on the CPU. It doesn’t take much, but in the long run, it’ll be worth it for you.

Want a little close up of how the CPU looks? We’ll try to keep you posted as information comes about. As of right now, if you’re looking at upgrading your system to an Intel 6xxx series processor, you may want to wait a little longer on choosing a heatsink or wait for a fix from Intel. It appears the bending phones is no longer the latest craze with Intel now in the game and we may just start having to do bend tests and drop tests on CPU’s… Just kidding. Boy does that last CPU on CPU picture look sad. 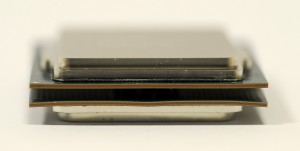