The Poor Geek > Homebrew > Everything’s better the second time around.

Everything’s better the second time around.

Alright, so I started a gallon of cider brewing a few weeks back, and pretty much butchered the process. I bought a bottle of unfiltered cider from Whole Foods, a vaporlock and tube of cider yeast from DeFalco’s, and jumped right in.

I did no preparation, and the tube of yeast I bought (in nutrient solution, shake and pitch) was meant for 5 gallons – I was only brewing one. I inadvertently put about half the tube in, and reaped the consequence of some bubbling out the vaporlock later.
I didn’t invest in tubing or siphoning materials for this either, so when racking I had to manually siphon from one jug to another, and I got quite a bit of material from the the yeastcake at the bottom of the primary fermenter into the secondary.
I’m pretty sure it’ll turn out rather foul. At least I did sanitize all the things, so it shouldn’t be too bad. 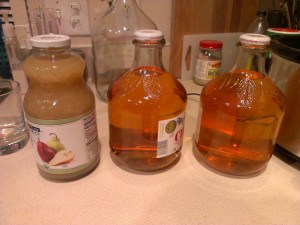 Started with a filtered apple cider this time, and added some mulling spices as well. I hear (after I had done this) that adding the spices during backsweetening is tastier, so I’ll probably do some of that as well.

Heating the cider base with the mulling spices

Once that was done I siphoned it into a 1gallon jug all clean and sanitized for the purpose and let it cool.

Plenty of room for bubbling.

I had a bit of the apple and pear left over that didn’t make it into the mulling pot, so I sanitized one of the smaller cider jugs and pitched a bit of yeast in it with some apple juice for a small why-the-heck-not batch.

Once the main batch cooled, I took a sample for original gravity reading, it’s currently right around 1.052 which seems to be right in the optimal range. I may pitch more sugar to bring that up a little.
Pitched the yeast, airlocked, and have it in the closet now. I’ve got a good feel about this batch.

Originally I was planning to do this article in kind of a how-to style, documenting each step. Turns out I get too into the process and forget to take pictures, and there are WAY better articles on cidermaking all over the internets, and most with very different ideas on how to properly brew hard ciders.
I’ve tried to take bits from here and there and put them together in a way that makes procedural sense to me.

I guess we’ll see how it goes!